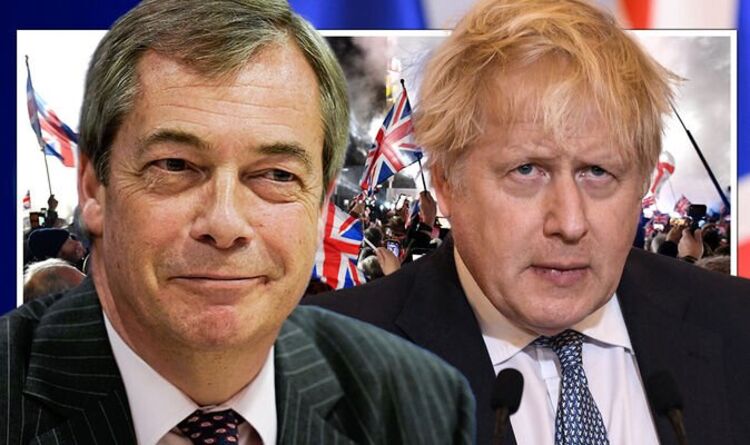 The former Reform UK and Brexit Party leader answered questions from Express.co.uk readers who were concerned about the ongoing Brexit negotiations. Readers asked who was to blame for Brexit not yet being fully delivered by the government.

He added that he was happy to know Jacob Rees-Mogg, “a true Brexiteer”, has been tasked with promoting the benefits of Brexit, wishing him well in his new role.

Express.co.uk readers have flocked to the website to thank and support Mr Farage, pledging to vote for his party in the next general election.

Reader CR2 said: “Nigel used to say things – and after a while I thought – yeah, everything he says about the EU turned out to be right…

“At first I thought he was like a lot of politicians just saying stuff…but he’s proven himself to be right time and time again…I either love him or eat him, the guy is still on the ball.”

Hitting the EU, reader PT19 wrote, “The EU is well on its way to happily destroying itself.

“Completely bankrupt because of the club med, the eastern countries hate Germany and France (as they always have anyway) and now the real truth of the Brussels clumsy federal farce is demonstrated to the world by their despicably weak response to events in Ukraine on their own doorstep.

“They are not a state, not a world power and deserve no respect. They are just a soft litigious regulatory body run by bureaucrats and third level regional politicians who have failed in their own countries but who are touted to be extravagant boardrooms in Brussels from where they claim to dictate political policy to national politicians who have actually been elected.

“Not because it would be good for the country, but simply because they cannot accept that they were wrong.

“Many of them have built their whole personality and self-esteem around the issue. Being ‘staying’ in their eyes has made them ‘superior’ to all incumbent voters.”

And reader Duderuffian added: “Until good people in the UK stop electing the same rubbish, absolutely nothing will change. LIB LAB CON is not fit for purpose. Vote Reform UK.

Many readers encouraged voters to choose Reform UK in the upcoming election.

Reader As above added: ‘Mr Farage, a patriotic gentleman who stood up to be counted when needed. Cheers for Brexit!’