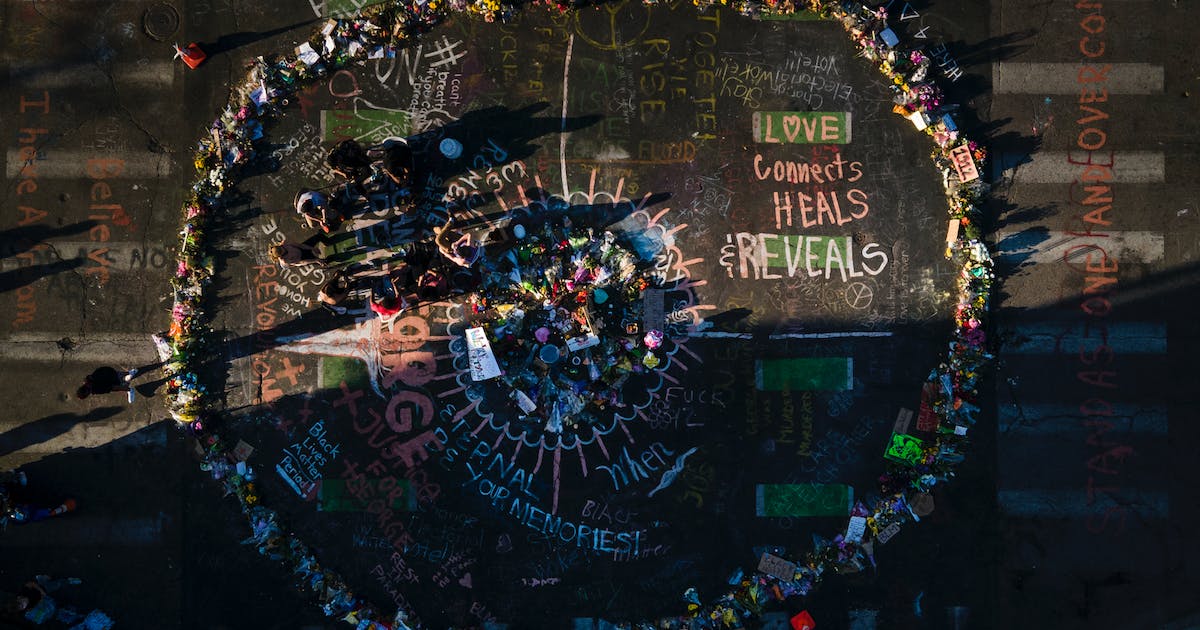 A black woman with a face full of anguish turns away from a white policeman trying to calm a crowd. A priest with a cellphone and searching eyes stands amid piles of bricks and other debris. An officer’s baton floats in a cloud of tear gas above a barely visible target.

They are part of the images in a remarkable photo exhibition, “Documenting a Judgment: The Murder of George Floyd“, now on display at the Elmer L. Andersen Library on the West Bank campus of the University of Minnesota. These images tell stories, some familiar and some not, that unfolded after Floyd died below the knee of a Minneapolis policeman.

The photo series begins in the hours leading up to the murder, with the image of a black child holding an American flag during his family’s Memorial Day celebration. It ends almost a year later, with the jubilation that greeted the guilty verdict against former officer Derek Chauvin. Between these bookends are dozens of photos that document moments of grief, terror, rage, dignity and redemption.

A crowd tries to disperse as a tanker truck smashes into protesters blocking Interstate 35W. A 13-year-old black girl happily jumps rope during a June 19 celebration in the parking lot of a damaged Target store. A policeman looks away impassively as a protester makes an obscene gesture inches from his face. A student hoists a Black Lives Matter sign along Lake Bemidji as pleasure boats sail in the background.

The exhibition chronicles events that are too recent to be history – and yet they are undeniably historical. To see these photos is to remember how profound the George Floyd saga was for the life of Minneapolis and the world beyond.

The images are the work of photographers with varying degrees of professional status. Some, like several from the Star Tribune, represent local news agencies. Some are freelancers on assignment for national or international media. At least one was simply taking photos of her family.

The organizing force of the exhibition is Regina McCombs, a senior fellow at the university’s Hubbard School of Journalism and Mass Communication, who acknowledged that the events surrounding Floyd’s murder were transformative not only for the community but also for the photojournalists who sought to document them. Photographers and other journalists worked in extreme conditions, risking arrest, injury or worse, some without the benefit of employer-paid lawyers or health care.

McCombs and her project colleagues, documentary photographer Nina Robinson and New York Times photo editor Brent Lewis, selected from more than 500 photographs submitted by 81 photographers. The images chosen are beautiful in their composition, stunning in their impact, or both.

And the exposure is appropriate for other reasons. Remember, the story of the murder of George Floyd is familiar to most of us because a teenage girl saw what was happening and had the presence of mind to raise her phone and capture the image. . It was an instant act of journalism that earned Darnella Frazier a Pulitzer Prize citation. His actions directly led to a calculation that helps change the world.

These photos are part of the change.

The exhibition “Documenting a Reckoning: The Murder of George Floyd” is free and open to the public until March 4. It will be transferred to the Mill City Museum in Minneapolis from March 17 to June 5.