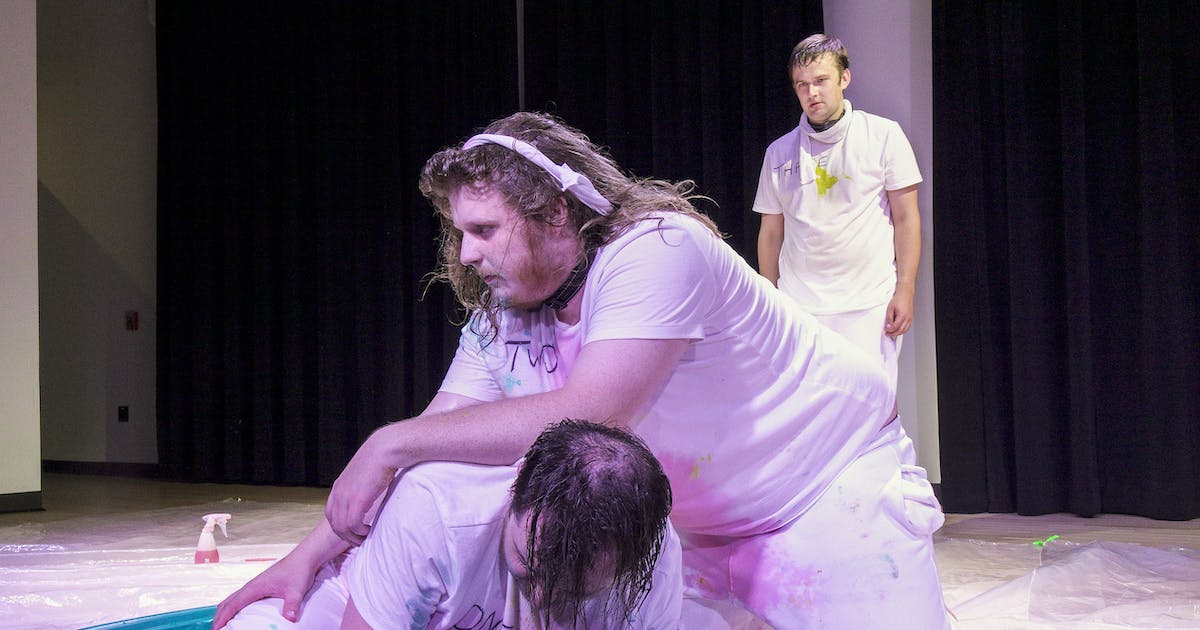 The 2022 Minnesota Fringe Festival kicked off Thursday at 11 Twin Cities venues, including the University of Minnesota’s Rarig Center, Mixed Blood Theater and Theater in the Round and outdoors at Xcel Plaza in downtown Minneapolis.

Until August 14, the festival has 113 shows which range from dance, theater and comedy to spoken word, musicals and puppetry, some of which are examined below. Casts range from solo shows to one with 63 performers.

It was when Danylo Loutchko threw slices of bologna at Jake Mierva’s stomach, trying to get them to stick, that I remembered what’s great about the Fringe. The two, plus Joseph McIntyre Godwin, play the “3 Guys”. The first minutes, it is simply Loutchko who installs tarpaulins and coolers (he is having fun), while smiling devilishly. The smile takes on new meaning as the three of them engage in some kind of torture experience. Guided by a robotic voice and wearing shock collars, they bombard each other with food and make you wonder who’s making them do this, right before you ask who’s making us do anything. “3 Guys” is hilarious, inventive and disturbing. (4 p.m. Saturday, 7 p.m. Tuesday, 5:30 p.m. Aug. 12, 8:30 p.m. Aug. 13, 1 p.m. Aug. 14, Center for the Performing Arts, 3754 Pleasant Av. S., Mpls.)
CHRIS HEWITT

Amid social unrest following the police killing of a young teenager, a locally-sourced Indian pizzeria is vandalized. Shattered that her long-held dream is in shambles, owner Joy (Chaitanya Bhandare), who is Indian, exclaims to lover Leila (Stella), who is black, “I am the victim here.” The show, written by Lakshmi Rajaram and Varghese Alexander, and directed by Madhu Bangalore for the South Asian Arts & Theater House, takes us on an understanding of the nuances and complexities of love across cultures in times of crisis. “Desi” has an ambition as big as its cast, with more than 60 people moving on stage (not all at the same time) in dance routines drawn from Bollywood and Africa (thanks to choreographers Anjali Gopal and Korma Aguh) . The crucibles of the show are old, but the juxtapositions and the message offer a comforting new light. (1 p.m. Saturday, 7 p.m. Tuesday and Aug. 12, 10 p.m. Aug. 13, Rarig Center Thrust, 330 21st Av. S., Mpls.)
PR

Adam Szudrich’s “Sunshine” is a one-woman show. One woman and many voices. Lisa Marie Fulton (Ellen) is terrific in a piece that requires her to interact with a variety of pre-recorded voices (thanks to sound and light crew Ash Beneke, Court Symons and Alex). Facing her 40th birthday, Ellen reviews dating and work vignettes. It’s kind of like “Sex and the City” in its outspoken talk about sex and its shift from bawdy comedy to drama. The play ends anti-climactic, but Fulton brings tenderness and wit to a woman whose therapist — well, her cat’s vet — says she suffers from “an absence of joy.” (4 p.m. Sunday, 5:30 p.m. Monday, 5:30 p.m. and 10 p.m. Wednesday, 8:30 p.m. Aug. 12 and 1 p.m. Aug. 13, CFPA, 3754 Pleasant Av. S., Mpls.)
CH

“Measures will be taken”

You may find yourself reaching for a (non-existent) volume button for this show. The absurd comedy is performed by a very emphatic cast of six, who seem to have rehearsed in a much more cavernous space than the one in which they are performing. “Action” takes the form of a non-motivational speech by job-phobic James (Rob Ward) discussing work and how not to do it. Various colleagues and bosses infiltrate, performing confusing dance routines. It’s a committed and well-rehearsed company, but “Action” feels like an inside joke that we’re on the outside of. (8:30 p.m. Monday and Thursday, 7 p.m. Aug. 12, 10 p.m. Aug. 13, and 8:30 p.m. Aug. 14, CFPA, 3754 Pleasant Av. S., Mpls.)
CH

What if there was no diamond, just fodder? “People R Ready” is a serious attempt at a musical with seven songs loosely attached to a story of children returning to school and looking for friendship after a difficult period of isolation. Its feel-good vibes also extend to its cast, with actors of varying abilities in the lead roles. But the show lacks an understanding of musical storytelling — how songs arise because just talking isn’t enough, and how music drives the narrative forward. Inertia binds its feet and this show never really takes off. (4 p.m. Saturday, 10 p.m. Sunday, 8:30 p.m. Wednesday, 5:30 p.m. Aug. 13, Rarig Center Thrust, 330 21st Av. S., Mpls.)
PR