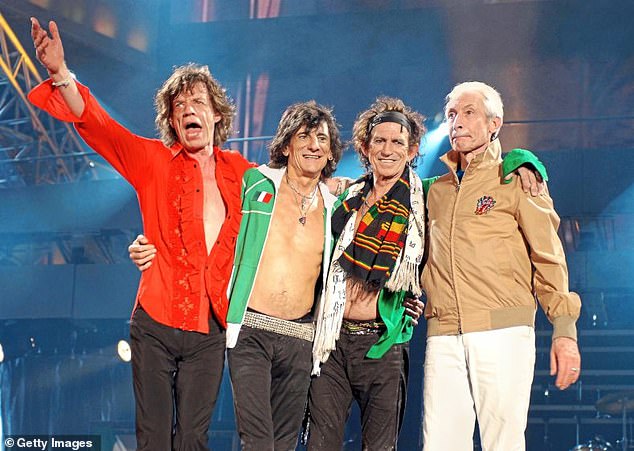 One minute I was telling him about our US tour… the next he was gone: Sir Mick Jagger reveals his last conversation with Charlie Watts hours before the Rolling Stones drummer died

By Nick Constable for The Mail on Sunday

Sir Mick Jagger has spoken movingly of his last conversation with Charlie Watts hours before the Rolling Stones drummer died.

The 79-year-old singer said he was sure Watts would recover from heart surgery because Stones guitarist Ronnie Wood had overcome a similar illness.

But unexpected complications arose and drummer Watts died in a London hospital last year after pulling out of the band’s delayed No Filter tour of North America.

Jagger said: “It was all so quick. That was the most shocking part. One minute I was telling him about the tour and what the logo would be and the next minute he was gone.

In an interview with author Paul Sexton for Charlie’s Good Tonight: The Authorized Biography Of Charlie Watts, Jagger said his friend had been reluctant to go on tour because he wasn’t feeling well.

But he assured Jagger, “You’re the cheerleader of the band and if you say I should do it, I will.” Of course. I am happy to.’

However, by mid-summer last year it became clear that the 80-year-old Watts was not doing well enough.

In August, the Stones’ official website announced that although he had undergone successful surgery, he could not attend rehearsals.

In an excerpt from the book published in yesterday’s Times Magazine, Jagger said: ‘I was talking to him in hospital and because he was so non-technical I sent him a big iPad to watch cricket.

Mick Jagger revealed his friend had been reluctant to go on tour because he wasn’t feeling well, but assured Jagger he was ‘happy’ if Jagger wanted him to join

“I set everything up with the apps and he looked at some of it.

“But Ronnie had had a similar illness and got better and that’s why I guess I was so confident Charlie was going to do the same.

Wood, however, wasn’t so sure. He told Sexton: “The last days of his hospitalization he was like, ‘I don’t like it’, because he went to a certain level of treatment and then they decided to do some extra work on him.”

He continued, “We were already well into rehearsals when we heard the news. We had the day off and we thought, well, Charlie doesn’t want us to sit around moping. We will continue.

This is the first time the band members have spoken about their last private moments with Watts while he was hospitalized.

However, the Stones have made a series of emotional tributes online following his death last August.

Watts had already recovered from throat cancer in 2004.

As they were: Brian Jones, Mick Jagger, Bill Wyman, Charlie Watts and Keith Richard of the Rolling Stones, photographed in 1964

Yet by 2018, according to Jagger, family and band members were growing increasingly concerned about his “picky” diet, and the singer resorted to nagging Watts to manage his diet.

“I would force him to eat with me at night,” he said. ‘Me and Charlie probably expend the most energy [during a gig] and he probably published more than me.

“You can’t stop and you can’t fuck yourself up.

“If I don’t want to run across the stage, no one will tell me I have to.”