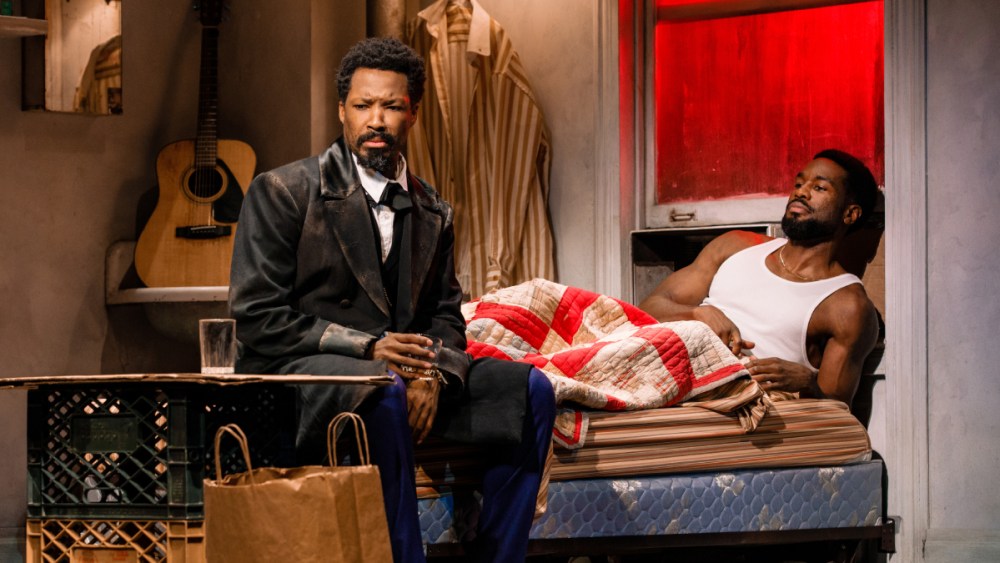 It is a testimony to the acuteness of Suzan Lori Parks‘ the imagination and the powers of perception which “Topdog/Underdogfeels as vital and electric today as it did 20 years ago. The first Broadway revival, which opened at the Golden Theater tonight, crackles like a live wire – an American fable with its finger stuck in an outlet. Launch outstanding performance in the career of Corey Hawkin and Yahya Abdul-Mateen IIand it is a theatrical event in the most essential sense, in that it demands to be seen here and now.

The 2001 play, for which Parks became the first black woman to win a Pulitzer Prize for drama, has risen to commanding stature in American literature over the past two decades, inspiring a generation of playwrights grappling with race, capitalism and their bloodstained lives. roots in the history of our country. It’s also loose and funny and magnetically entertaining, slow-burning dramatic fireworks. On the page, Parks is known for her liberal, almost sculptural use of empty space. Under the direction of Kenny Leon, this production fills them with swagger and heart.

It’s easy to read the two brothers, named Lincoln and Booth in a biting joke of parents who abandoned them, as allegories. They share cramped quarters in a rooming house, where their rivalry and mutual dependence ricochets off the walls. Booth, the youngest, is a schemer and a dreamer, an ace shoplifter and an unfortunate womanizer who exemplifies hustle – a strategy for surviving the system by playing it. Lincoln mastered this route, but abandoned it after a chum was killed. Now he’s doing the “honest job” of dressing up in whiteface like the Great Emancipator, in a game room where he rehearses his death for trigger-happy patrons. “It’s a life,” says Lincoln. “But you’re not alive,” Booth replies, and Lincoln replies, “I’m alive, aren’t I?”

They are also men of appetite, pride and perseverance rendered down to the smallest detail. When Lincoln calls out the glued-together pages of Booth’s collection of pornographic rags, the younger responds, “If I didn’t take care of myself, I’d be out there running ‘spending money he doesn’t.’ didn’t and pull people “out of need for unresolved sexual release”, plus – he did it with Lincoln’s ex after she dumped him because he couldn’t. TO DO (!). The couple rubs shoulders, takes the jugular and withdraws in a poetic rhythm that overflows with the gall shared only between parents.

The two stars show an agility and precision that disappear under their natural ease. Every moment is totally compelling. Hawkins, nominated by Tony for “Six Degrees of Separation”, wears Lincoln’s restless resignation like the weathered frock coat in which he mimes his own assassination. It’s a remarkable turn that weaves the character’s apparent contradictions into an utterly believable man of principle and deceit. Abdul-Mateen II, who broke out in his Emmy-winning role on HBO’s “Watchmen,” is making an extraordinary Broadway debut, lending bravado and simmering resentment to Booth’s hopeful delusion. The expert training and jostling in between is such a pleasure to watch that he may even lull the audience into a false sense of comfort. The brothers could go on joking like this forever, right?

The insight into the play’s ideas – about history (which people love to see “unfold as they folded it”), longing, legacy and more – only got sharper with the time. And they benefit from the lived-in but grandiose presentation of Leon’s staging. Ornate golden curtains draw back in waves around the shabby chamber where the brothers crowd, suggesting a larger, more majestic backdrop (set design is by Arnulfo Maldonado). The production feels both like a timeless spectacle and a peek through its stained window.

There’s a flip side to the thrill of a belated “Topdog/Underdog” revival that feels so decidedly hip in the moment. It’s true that too little has changed in the system that demeans black men, that demands hustle and consumption even as it consumes everyone in its path. It’s also true that the play distills much more than how people are shaped by social forces, burying itself in what motivates them. It is a ticking time bomb that will always be ready to explode.