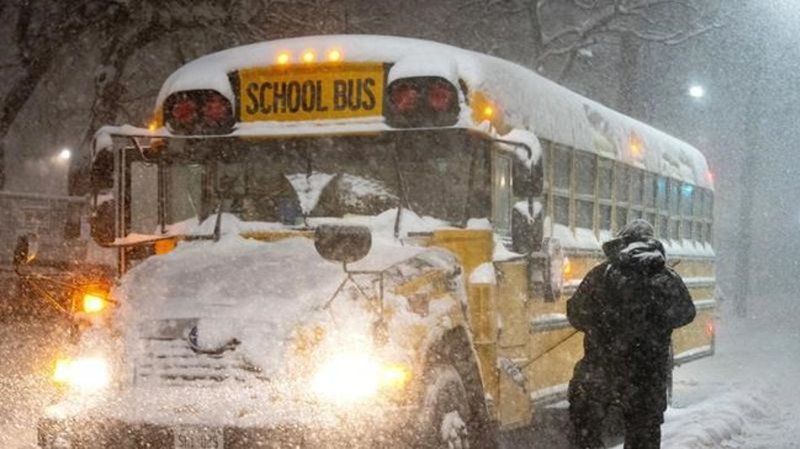 “Certainly places along the shores of Lake Huron and the shores of Georgian Bay have experienced fairly large lake effect snow events that could give them similar snowfall totals, but for such an area extent, receiving such amounts of snow is quite rare.”

It’s also rare to see a blizzard warning issued for the Toronto area, he said.

“(In) Toronto, as far as I know, we haven’t seen a blizzard warning for at least a few decades,” Flisfeder said. The Toronto area was later downgraded to a winter storm warning.

A blizzard warning means the agency expects at least four hours of 400 meters or less visibility, with winds of at least 40 kilometers per hour, he said.

By comparison, a winter storm warning means a forecast of more than 25 centimeters of snow within 24 hours, along with other criteria such as blowing snow and reduced visibility, he said.

Alireza Firoozi, a resident of Newmarket, Ont., got up Monday morning with a mission to go to his office in downtown Toronto. But soon after he started driving, he said he was filled with regret.

“I saw the snow and I couldn’t move, but I pushed myself. I think I could have worked from home, but I didn’t,” he said.

Firoozi then decided to take refuge with his girlfriend in north Toronto, but as he tried to stop in front of his condominium building, his car got stuck in the snow.

“I read the news last night and they said today there was going to be a storm and bad weather, and I thought, ‘I can do this, I can do this’, but I don’t I didn’t,” he said with a laugh. before making another attempt to pull his car out of the snow.

By Monday afternoon, the storm’s intensity had already diminished, and that is expected to continue until the system moves eastward, Flisfeder said. There could still be lingering road closures on Tuesday as municipalities scramble to clear snow, he said.

The weather prompted many school boards to cancel school bus service and in-person classes on Monday, as schools were set to reopen after two weeks of online learning.

Mail delivery was also suspended in areas battling the storm. Canada Post said it was issuing a “delivery service red alert” for Eastern and Southern Ontario, meaning delivery would be suspended and agents would not be dispatched.

Dozens of flights to and from Toronto Pearson Airport were also delayed or canceled Monday morning, according to the airport’s website.

Toronto police have temporarily closed two of the city’s major highways, the Gardiner Expressway and the Don Valley Parkway, for safety reasons. The Gardiner and DVP fully reopened in the afternoon.

Schmidt posted several videos from the Toronto portion of Highway 401, showing a handful of vehicles stopped in the snow. “The only traffic I see is stuck vehicles,” he said, adding that even some tow trucks have been stopped.

“It’s the day you should have stayed home,” he said.

Premier Doug Ford tried to help drivers stranded in snow in Toronto. In an interview from his vehicle, Ford told TV news channel CP24 that he was driving to check on people and offer rides home.

“Cars are stuck everywhere,” Ford said. “You just do what you have to do. Everyone does it, I’m no different. Prime Minister or no Prime Minister… here to help your neighbors right now.

Transit in the Toronto area has also been affected by the weather, with the regional GO Transit network announcing that a number of its bus routes will be temporarily suspended or adjusted for safety reasons.

The Toronto Transit Commission said customers should also expect longer than normal wait and travel times as snow affects all of its bus and light rail routes.

A number of communities have also canceled COVID-19 vaccination clinics for the day due to weather. Clinics have been canceled in Toronto, Niagara Falls, Stratford, Oshawa and in Simcoe-Muskoka and Leeds, Grenville and Lanark health units.

Environment Canada has also issued winter storm warnings for most parts of Quebec, with 25 centimeters of snow expected in areas of Montreal and the provincial capital, while the Gatineau region near Ottawa could see up to 40 centimeters of snow before the end. of the day.

For Montrealer Olivier Lecomte and his three children, the snowy conditions didn’t prevent them from enjoying a day outside.

“A snowball fight, building a snow castle and shopping,” Lecomte said, describing what Monday’s storm had in store for the family.

While elementary and high school students were expected to resume in-person learning on Monday across Quebec, most establishments remained closed due to the weather. The Lecomte Children’s School was no exception.

“We expected them to finally go back to school after online lessons, but we still adapted today because of the storm,” Lecomte said.

The streets of the city’s Plateau-Mont-Royal borough were empty on Monday afternoon, but Louise Paul, 71, was absent, already shoveling her car. She said she hoped to hit the road by the end of the day to run some errands.

“We’re used to it here in Quebec, I expected it to be a lot more intense than that,” Paul said, pausing to contemplate the amount of work she faced. “Although, maybe I’ll wait (for) tomorrow.”

Provincial police reported pile-ups of multiple cars, closing parts of three major highways around areas of Montreal. Police said in a statement that some people were injured, but “none appear to be life-threatening at this time.” Quebec Transport Minister Francois Bonnardel posted several tweets, asking people to stay vigilant.

Winter storm and wind warnings were also in place for much of Alberta, including Edmonton. In parts of the province, Environment Canada said temperature drops of 10-15C were possible in a short time.

In northern Manitoba, the weather agency issued extreme cold warnings, saying temperatures in the -30s, combined with winds of 10 to 20 km/h, would produce an “extended period of extreme wind chill values over the next few days.” Parts of southern Manitoba were expected to see heavy snowfall Monday evening.

This report from The Canadian Press was first published on January 17, 2022.